I got off to a late start today for several reasons. First, I was awakened early by what I identified as either a gunshot or an automobile backfiring right outside my window. I jumped up and peeked outside the window where I was relieved to see the back-end of a pick-up truck putting out a lot of steam, smoke, and water from the tailpipe. Somewhat reassured, I fell back to sleep. When I finally did wake up I had several hours of work that I needed to do. I am teaching two online courses this term for Gonzaga University—both of which officially started today—and there were a number of postings to be made and email correspondence to do. It was nearly 2:00 p.m. by the time I pulled out of Springfield and headed southwest. 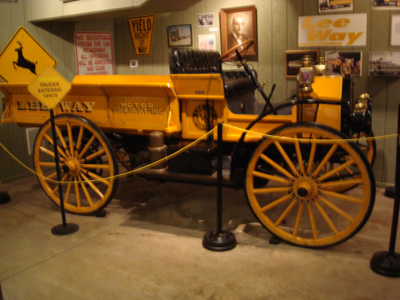 While driving through Carthage I noted a sign for the 66 Drive-In Theater and wondered whether it was still open for business.

As a result of my late start it was nearly 5 p.m. as I approached Claremore, Oklahoma, home of the Will Rogers Museum. I’m going to try to visit it on my way back home.

While I had hoped to make it to Oklahoma City for the night, it was getting dark by the time I reached Tulsa, and so I have stopped here for tonight. I will need to get an early start tomorrow if I am to make it to Amarillo, Texas.